The inhabited bridge is a structure that in addition to its basic function of bridging physical obstacles, such as a body of water, valley, or road, can also perform residential and commercial functions. These bridges are rare in the world and for that reason are very popular among tourists. 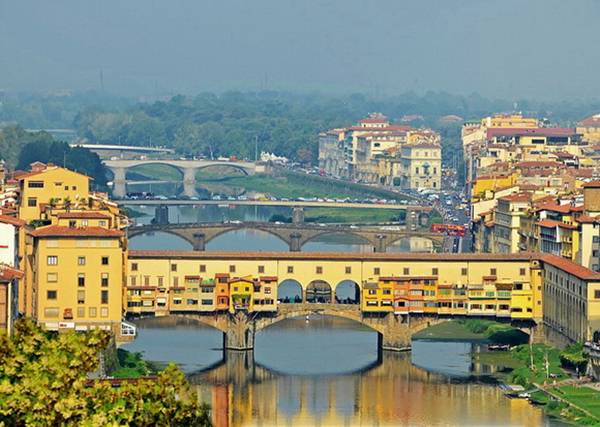 The Ponte Vecchio is the oldest bridge in Florence. It is believed that a bridge already existed here during the Roman times. Its current appearance dates back to 1345 when it was built to replace a bridge which was destroyed by a flood. Houses were built on the bridge, a common practice in large European cities during the Middle Ages. 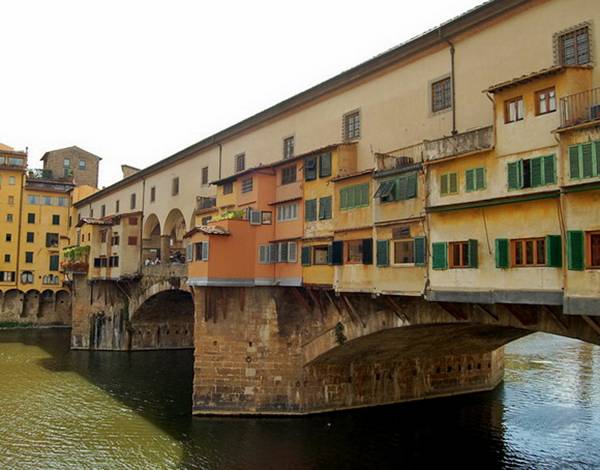 The houses on the bridge were initially used as workshops and a diverse array of shopkeepers such as butchers and tanners did business here. In 1593 duke Ferdinand I decided to replace them with goldsmiths, reportedly because the shops produced too much garbage and caused a foul stench. 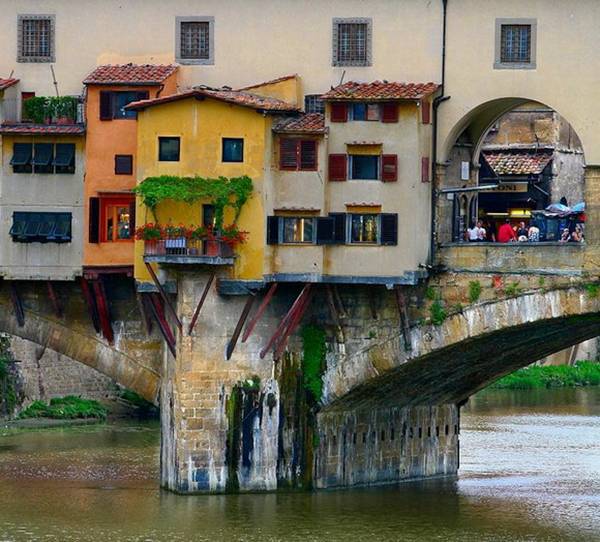 Today the houses are used as shops selling a wide assortment of jewelry, ranging from affordable modern jewels to pricey antiques. Link — Map

The Krämerbrücke is a bridge in the Thuringian city of Erfurt in Germany which is covered with inhabited, half timbered buildings on both sides. It is unique in Europe north of the Alps. The footbridge spans the Breitstrom, a branch of Gera River, connecting Benediktsplatz and Wenigemarkt.

Currently mostly artisans and antique shops can be found in the 32 houses on Krämer Bridge. Except for the houses numbered 15, 20, 24 and 33, all houses are municipal property. The building was and is a touristic highlight and a must-see.

The municipal administration maintains a foundation for the conservation of this unique historical monument, the Krämerbrücke Foundation. The greatest city festival of Erfurt is named after the bridge: Krämerbrückenfest. It is held around the bridge and in the old town annually in June. Link — Map

Pont de Rohan is inhabited bridge in Landerneau in north-western France. This bridge spans the river Élorn. Since 1336, when it was built, it was restored in 1510 by Jean II de Rohan (nobleman from 15th-century). Originally contained two stores, a mill and a prison.

Today Pont de Rohan contains two lines of houses on both sides and represents a landmark of Landerneau (a commune in Brittany). Link — Map

The Covered Bridge is, as the name suggests, a covered bridge in the town of Lovech, Bulgaria. The bridge crosses the Osam River, connecting the old and new town parts of Lovech, being possibly the most recognisable symbol of the town.

After the bridge that then served the town was almost completely destroyed by a flood in 1872, the local police chief ordered the famous Bulgarian master builder Kolyu Ficheto to construct a new one. Ficheto personally chose the material for the wooden bridge. Each citizen of Lovech contributed to the building process, the poorer ones working themselves and the wealthier donating money and paying other workers. Building finished in 1874.

The interior of the bridge  Photo — Link

The Pont des Marchands is a historic bridge in Narbonne, southern France. It serves as a foundation for a row of houses and shops underneath which the Canal de la Robine runs through the old town.

Its segmental arch has a span of 15 m (50 ft). In Roman times the structure featured as many as six arches. Link— Map

Pulteney Bridge is a bridge that crosses the River Avon, in Bath, England. It was completed in 1773 and is designated by English Heritage as a grade I listed building.

The bridge was designed by Robert Adam, whose working drawings are preserved in the Sir John Soane's Museum, and is one of only four bridges in the world with shops across the full span on both sides. Shops on the bridge include a flower shop, antique map shop, and juice bar. Link — Map 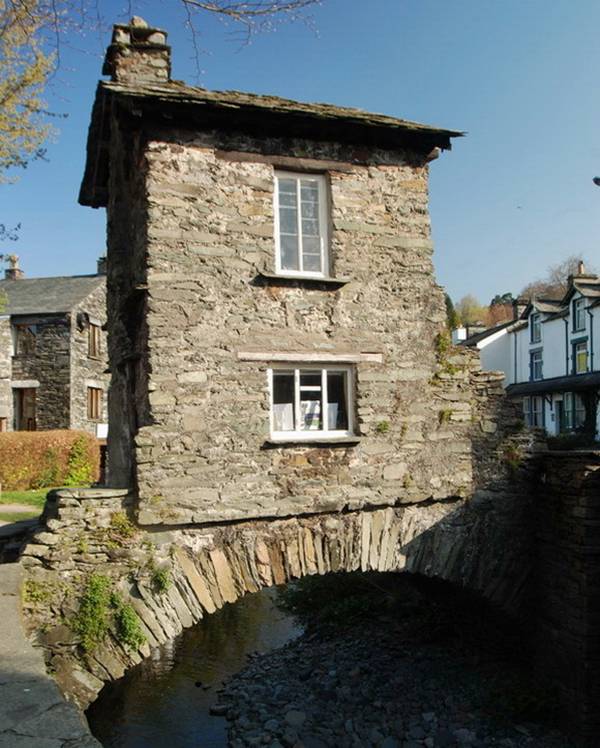 Bridge House in Ambleside, was built over Stock Ghyll (stream) more than 300 years ago probably as a summer house and apple store for Ambleside Hall. The building was purchased by local people in 1926 and given to the National Trust for Places of Historic Interest or Natural Beauty.

It is now used as an information centre for the National Trust, and is part of the Trust's Windermere and Troutbeck property. Link

A symbol of Vernon (northern France), the old mill still lies straddling two piers of the ancient bridge over the Seine. The mill was probably built in the 16th century. It is a private property belonging to an unknown American heir. The town of Vernon had the mill renewed a few years ago. This mill illustrates the postal logo of the city. It has been represented thousands of times by painters, even by Claude Monet. Link — Map — Via